I first met Jared Montz through Twitter. He is a recently retired professional soccer player, playing for a variety of teams. I had the pleasure of interviewing Jared through email recently. 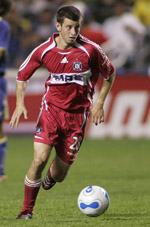 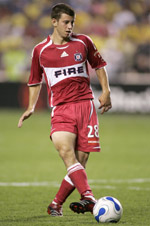 When and why did you start playing soccer?
I started playing soccer at 5 years old because my parents signed me up. When I was 12 is when I decide that I wanted to be a pro soccer player. I was passionate about it, loved the game, and I didn’t like people telling me I couldn’t do it so I wanted to prove them wrong.

What position(s) do you play?
When I was a player I played mostly center midfield and right back.

What teams have you played for?
I have played for the Chicago Fire, Virginia Beach Mariners (2 weeks and then the team folded), Vancouver Whitecaps, and the Puerto Rico Islanders.

Do you have any pre-game rituals?
No rituals. Usually just made sure I ate properly and was hydrated.

Who is your favorite professional soccer player?
I am not good at picking favorites. I attempted to do a list but it was getting to long.

Who is your favorite professional soccer team?
Once again I am not good at picking favorites. I will pick my top MLS, WPS, and Foreign team.

What advice would you give to youth players looking to become better soccer players?
My advice would be to believe in yourself no matter what anyone says but back that up by working hard and improving your game on a daily and weekly basis. One great way to do that is by watching the pros and trying to learn from them. You can learn a lot from watching the game and how the professionals play it. Study how they move off the ball, how they take their first touch usually away from the defender, how they communicate when they are playing, and how consistent they are.

Recently, we learned that you have officially retired from playing soccer. What are your plans for the future?
My plans for the future are to continue to learn the game of soccer and give that knowledge to my players. I have a few ways of doing that. One being my soccer camps and the second being my Online Soccer Academy. I want to give my players the soccer smarts I never had as a kid and inspire them to believe that they can do anything they put their mind too if they work hard and believe in it!

Other plans for the future consist of motivational speaking, blogging, producing a lot more MontzTV episodes, starting my podcast series, and hopefully some traveling to watch a lot of soccer games in stadiums I have always wanted to see!

Do you play any other sports besides soccer?
Growing up I played baseball until I was about 13. Now that I am retired I will probably be getting into some tennis, volleyball, swimming, kayaking, and skeet shooting.

Thanks Jared for taking the time to interview with Sideline Soccer. We wish you much success with your future plans both on and off the field!