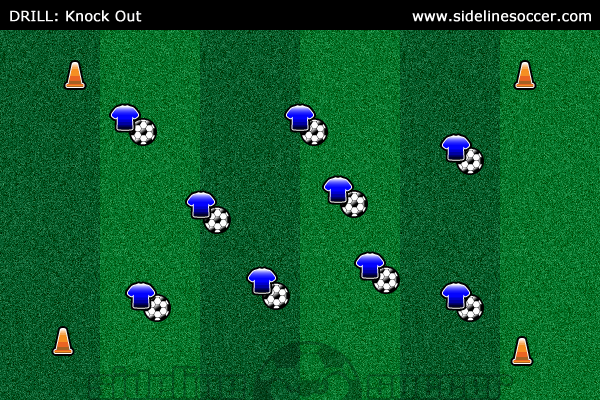 Setup
Designate a playing area with cones. The size of the playing area will depend on the number of players. You can also use the penalty area since that is already marked off for you. Every player will need a ball.

Instructions
To start, have each player dribble around the designated playing area. As soon as you yell “Knock Out”, players need to try and kick another player’s ball out of the playing area, while still keeping their own ball in control and close to them.

NOTE: To give the game a bit more incentive for the older players, you could say that if your ball is knocked out, you need to do a certain number of push-ups, sit-ups, or sprints.

Variations
Make players dribble with certain parts of their feet. Players tend to favor a specific foot for dribbling, make them dribble with the opposite foot. For younger players, you can play Shark Attack.