As a coach, you are not only responsible for your players, but for their parents as well. Parents play a big role in a player’s soccer experience both on and off the field. It is important for you to discuss your goals with them, as well as set guidelines before the season begins.

Be part of the team
Even though parents are not on the field actually playing, they are still part of the team. Ask them to help out by volunteering to pick up and drop off players who live in the same town as they do. Maybe help start a fundraiser or set up meeting places for away games. Anything to support the team is a big help to the organization, the coaches, the players, and the other parents.

Be the biggest fan
Tell parents to be supportive before, during, and after a practice or game. Of course, they will cheer for their own child, but they should also cheer for the rest of the team, as well as the opposing team. They must always think positive when cheering. Use positive statements like “nice pass”, “great shot”, or “good hustle”. Never put a player down for making a mistake.

Be aware of the rules
Not everyone grew up playing soccer. Not all parents are familiar with the game or the rules. Provide parents with handouts outlining soccer terms and rules of the game. I can’t tell you how many times I heard my mother yelling “red card” at every play in the game! Educated parents are usually quiet parents!

Be a parent not a coach
Remind parents to leave the coaching to you. Advise parents that you are committed to developing skills and techniques to make their children become better soccer players. In order to do that however, players must pay attention and listen to the coach. Parents who yell instructions from the sidelines cause confusion and frustration to coaches and players. Also, advise parents that they should never yell at or argue with the referee. 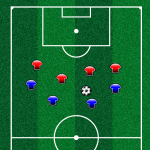