Where To Strike A Penalty Shot

Ever since the penalty shot was first approved back in 1891, it has always been the most nerve-wracking moment for all to watch, especially for the player taking the shot! While goalkeepers are not expected to save a penalty shot, players taking it do miss on many occasions. But even if you’re nervous or do not strike the ball as hard as you wanted, a well placed shot will almost always guarantee a successful penalty shot. The question is where to place it?

Before we discuss where to strike a penalty shot, let’s go over some key points to keep in mind when the responsibility of taking a penalty shot is on you. 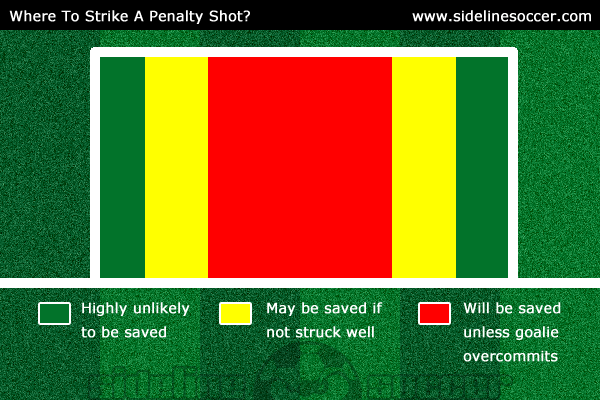 The Red Zone
In the diagram above, you can see that the red zone is the most dangerous area to strike a penalty shot. The goalkeeper stands in this position at the start of a penalty shot. If the goalkeeper does not overcommit, meaning the goalkeeper does not dive before you make the shot, there is a high percentage that it will be saved. It is very common for goalkeepers to anticipate where you will shoot and try to get a head start. Some players have decided to use that to their advantage and actually shoot the ball down the middle. Sometimes it does work! But it is very risky and you may not be that lucky!

The Yellow Zone
In the diagram above, you can see that the yellow zone can result in a goal but only if the ball is struck with pace. If it is not a well struck ball, the goalkeeper has a better chance of making the save, especially if he/she guesses the correct side when diving.

The Green Zone
In the above diagram, you can see that the green zone has the highest percentage of success for placement of a penalty shot. Much research has been done where many agree that the top corners of the net have a 100% success rate. However, they also have a high rate of misses. So it is better to aim for the lower part of the net.

Remember, make a decision on where to strike the ball and stick to it. Strike it with pace and DO NOT lean back! Practice makes perfect so get out there and take some shots to better prepare for the next time you’re called upon to strike a penalty shot!

How to practice soccer on your own

Soccer is better than just running for women

When in doubt, kick it out!