NOTE: This is provided for informational purposes only. It is not intended to be a substitute for professional medical advice, diagnosis, or treatment. Always seek the advice of your physician or other qualified health provider with any questions you may have regarding a medical condition.

Ever watch the pros play and think to yourself, how do they do that? How does Ronaldo step over the ball so many times in just one move? What makes Robin Van Persie’s volleys so powerful and accurate? What makes Messi… well… Messi? For one thing, genetics. But until science gets there, that aspect of their abilities isn’t reproducible. One thing they do have and that we can apply to our training is building strong and powerful hips. A strong hip/pelvic region is imperative for high-end performance regardless of competitive level, age or position.

The hip joint is a ball and socket joint so there is great freedom of movement (think of the movement associated with a joystick). However, given the numerous ligament and muscle attachments in and around the area, along with the congruency of the joint itself, the hip is a very stable joint. This dynamic makes it a very important anatomical region for just about every sporting endeavor.

A good understanding of the hips anatomy and function helps greatly in devising strength & conditioning routines. The muscles of the region often have multiple actions and function at multiple joints. Generally speaking, there are 17 defined as “hip muscles” (with a few others crossing the region, but imparting more of their action at the knee joint, such as the sartorius, biceps femoris and hamstring muscles). We can categorize them into 4 groups according to primary action and orientation about the hip. These 4 groups would be (1) the gluteal group, (2) the adductor group (3) the iliopsoas group and finally (4) the external/lateral rotators.

The gluteal group is what we fondly refer to as the caboose. This group includes the gluteus maximus, gluteus medius, gluteus minimus & tensor fasciae latae. The main function of this group is hip extension and abduction. A lot of power is generated here and these muscles are instrumental in acceleration actions, step overs, cutting and jumping.

The adductor group consists of adductor brevis, adductor longus, adductor magnus, pectineus and gracilis. The group functions mainly to bring the leg towards /or across midline. These muscles play a major role in ball control and kicking.

The iliopsoas group is made up of the the iliacus & psoas major. Together they act as hip flexors and are important with leg elevation during running, jumping, trapping and kicking.

The last group is the external/lateral rotators. This group consists of piriformis, obturators externus and internus, quadratus femoris and the superior and inferior gemelli muscles. They are integral in agility moves along with positioning the leg for trapping and kicking.

The following 10 exercises address all the aforementioned groups. They encompass each aspect of training including power, agility, strength & endurance, and balance. Add them into your training to keep you at the top of your game, and dominating the pitch like your favorite player!

Use a plyometrics box high enough to challenge your capabilities, but low enough not to cause injury (rule of thumb… start low and work your way up). Start with both legs shoulder width apart. Make a single preparatory move, squatting slightly, leaning torso forward and bringing arms back behind trunk. Your weight should be on the ball of your feet (think about the position you’re in playing defense). Jump in a single, explosive movement, throwing arms overhead and extending hips, knees and ankles. Make sure to have a more vertical path so that your shins and toes clear the box. Land softly, allowing all joints to bend slowly and quietly (pretend like you are landing on egg shells). Do 3 sets of 5 repetitions.

Your movement and focus here is the same as it is with bilateral box jumps. The explosion here from a loaded position (prep) to unloaded (jump) is really important for proper technique and a safe landing. This exercise is great in addressing power asymmetries from one leg to another. Do 3 sets of 5 repetitions.

Side Plank with Hip Abduction 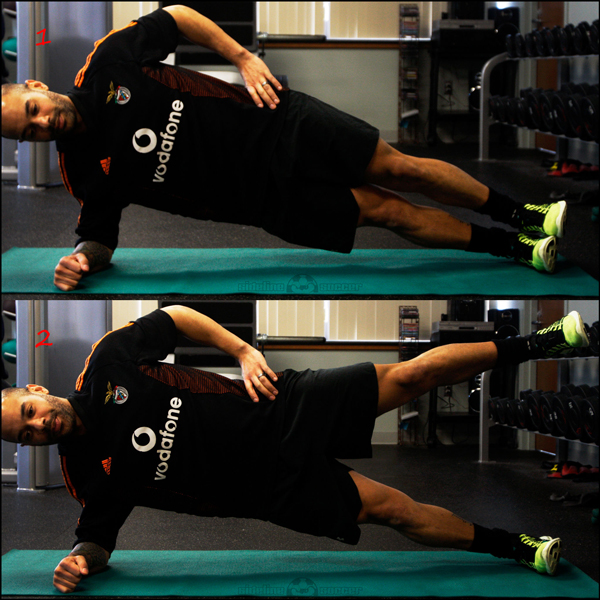 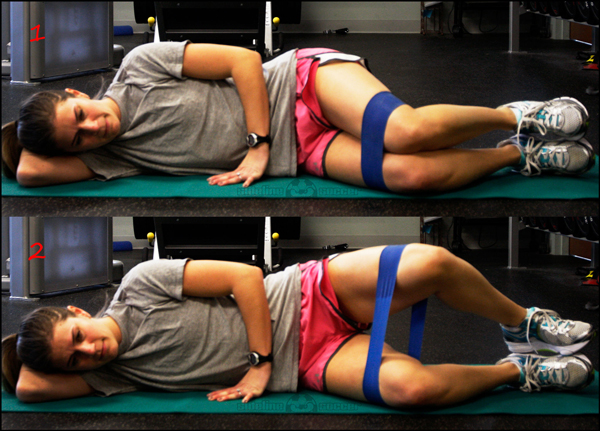 With a resistance band pulled over your legs and resting just above your knees, bend both your hips and your knees and place your heels together. Using your heels as the pivot point, slowly lift your top leg against the band and return it to the starting position with equal pace. With this exercise, it is also important not to roll towards your back when lifting your leg. Do 3 sets of 12 repetitions. 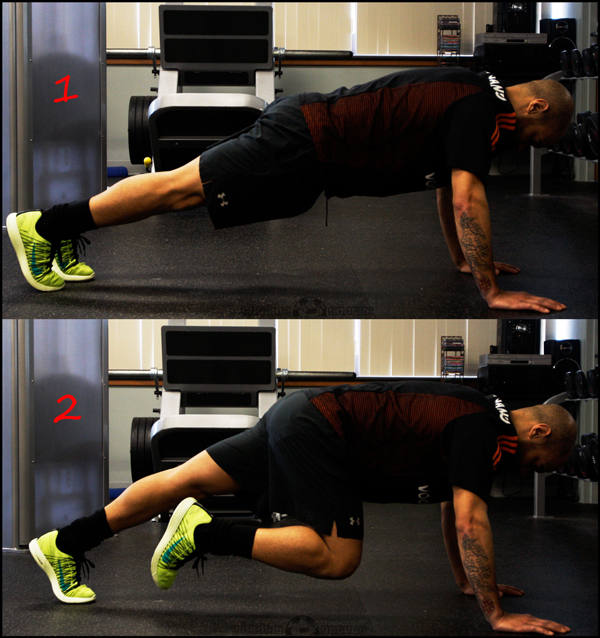 Start in a push up position. Quickly hike one knee towards your chest. Simultaneously, bring that leg back to the starting position and quickly hike the opposite leg to chest. The maneuver should be continuous (think of doing high-knees, only in a push up position). Try to perform a 30 second bout 3 times. As you get more comfortable, work your way up to a minute. 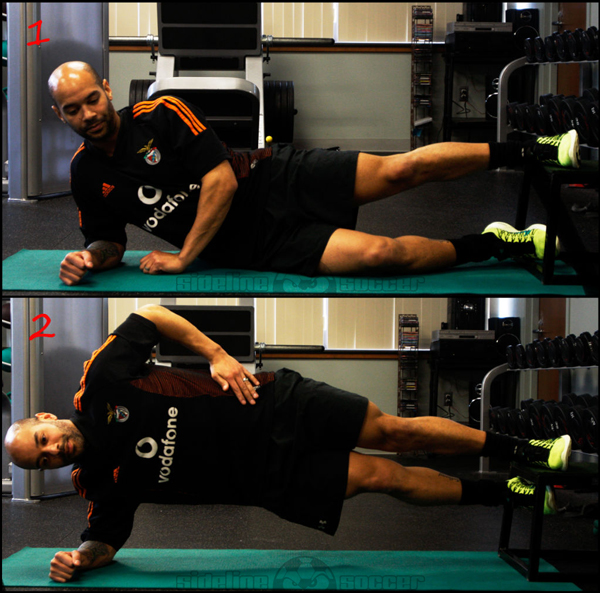 Start by lying on your side with top leg on top of a 12 inch plyometrics box (a chair can be substituted for the box). Lift your torso and lower leg so that you are supporting your weight on your forearm and inner foot. Hold the position for 10 seconds and do 10 repetitions. Work your way up to a 30 second hold. 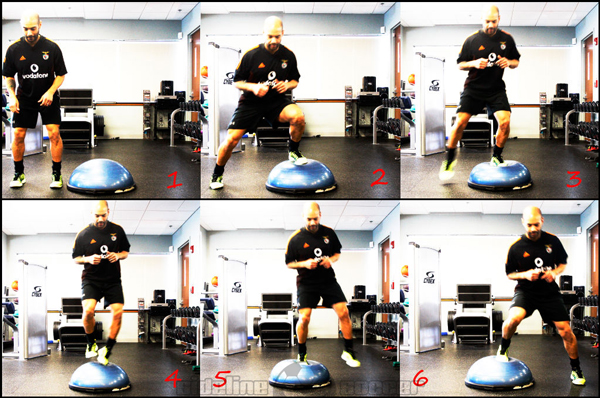 This exercise can also be done with a box or any low lying, stationary object. Start in an athletic position (knees and hips bent, weight slightly off heels and onto the balls of your feet) to the side of the BOSU ball. Quickly jump laterally, landing very briefly on the lead leg. Immediately switch stance legs, and land on the other side of the ball with your lead leg. This exercise is also done continuously, attempting to keep a swift, constant pace side to side. Do this exercise for time, starting with three bouts for a minute each. 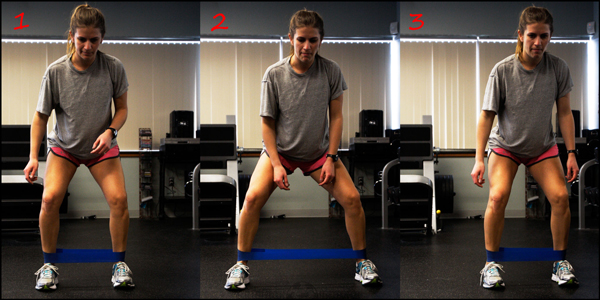 Start in an athletic position with resistance band around ankles (tension should already be on the band). While keeping your torso upright, lift and step laterally. Bring trail leg back to the starting position. Avoid dragging/or sliding your trail leg and make sure not to allow it to travel more than the original shoulder width, otherwise the band will lose tension. Back and forth make one repetition. Do 3 sets of 10 repetitions. 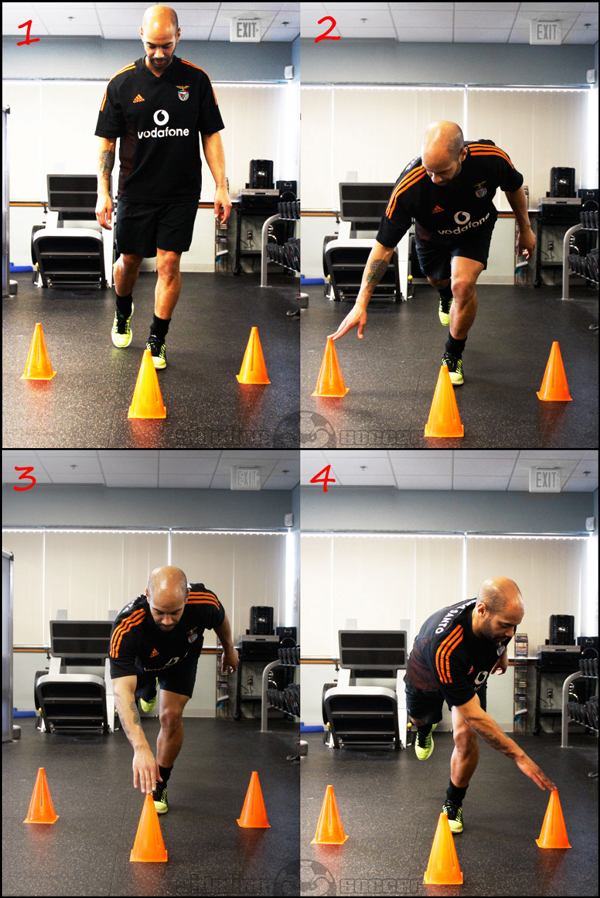 Place three cones in front of you, each about two feet apart and in triangle formation. Balance on one leg slightly behind this triangle and centered to the middle cone. With the opposite hand from the leg you are standing on, reach out laterally to touch the first cone. Bend at our hip, knee and ankle. Return to your upright starting position and repeat the process touching each cone. Touching all three cones makes one repetition. Do 3 sets of 5 repetitions. 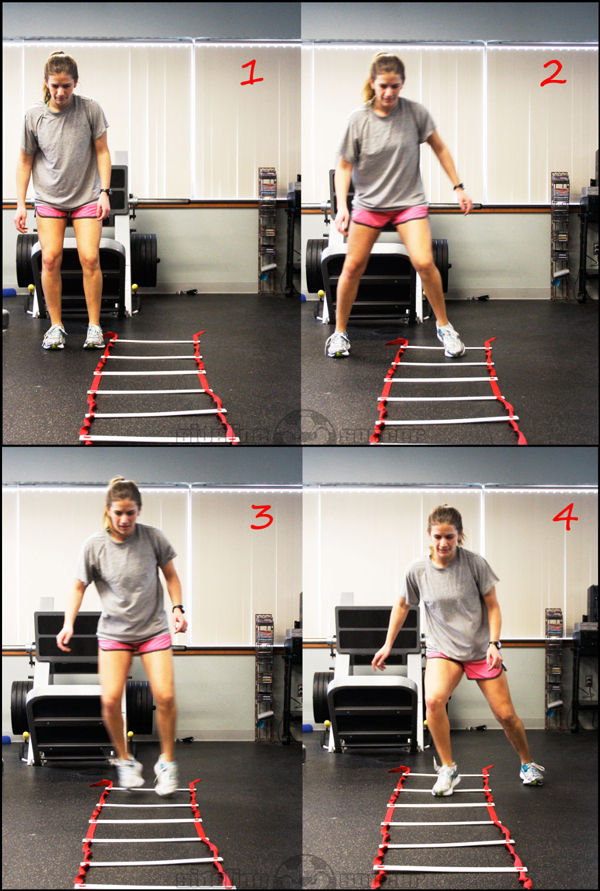 Stand to one side of an agility ladder. Lead with your inner leg into the first box. Immediately upon touchdown, switch that foot with the one you pushed off with, and land with the lead leg outside of the next box. Continue on down the ladder in the same fashion. Remember, at any point there should only be one leg outside the boxes, and two should always touch inside. Try making your way up and back the ladder, 4 times over. To really challenge yourself, do the same pattern backwards on the return trip.