The Dummy is a simple but effective soccer trick used to deceive the opponent into thinking you’re receiving the ball, when in fact you allow it go by you while you turn and run onto it. With this article, we’ll provide step by step instructions as well as a video example. 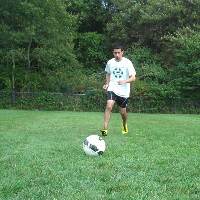 The best time to use the dummy trick is when you’re running toward your teammate passing you the ball and you want to turn with the ball and dribble in the opposite direction. 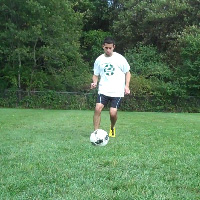 As you approach the ball, you really need to sell the idea that you’re going to trap the ball and then turn with it. 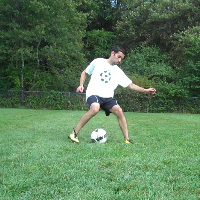 Instead of trapping the ball, allow the ball to roll through your legs as you turn your body in the opposite direction. 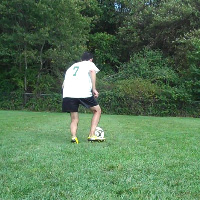 Finish your turn, take control of the ball, and burst into speed away from your opponent.

Before using this trick, there are a couple factors to keep in mind. First, the speed of the ball. If it’s too fast, you may not be able to run onto it and end up losing possession. If it’s too slow, it may not roll by you and the opponent may step in and take possession.

The second factor is being aware of your opponent’s position in relation to yours. You must take a peek back before receiving the ball to know for sure. If the opponent is too far away when performing the trick, it won’t really have any affect and you run the risk of losing possession. If the opponent is right behind you, they may be able to poke a foot in or get lucky and the ball will actually run into them.

It will really come down to a last second judgement call by you based on the speed of the ball and where the opponent is in relation to you. To me, the best success rate I’ve seen is when the opponent is not exactly in line with the ball. If they stand to one side or the other while approaching you, you have a better chance of pulling off the trick. You just need to sell the idea that you’re about to turn in a certain direction.

Below is a video example: 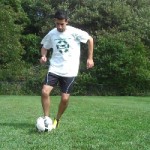