No, it’s not Shark Week on the Discovery Channel! This is a fun soccer game for the youngsters! The object of the game is for players to dribble from one side of the ocean to the other without getting caught by the sharks! 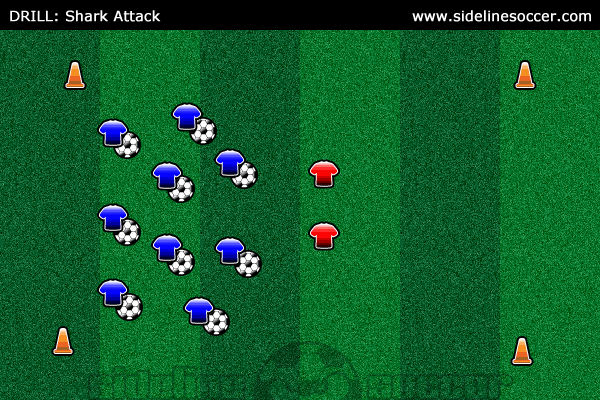 Instructions
Players will start on one side of the playing area, except for the sharks. Players designated as sharks will start in the middle. Players must dribble across to the other side with the ball in control at all times. The players designated as sharks try to kick the ball out of the playing area from the players crossing to the other side.

Once a player’s ball is kicked out of the area, they are out of the game. If any player dribbles outside of the playing area, meaning they lose control of their ball, they are also considered out of the game. Continue playing the game by making the remaining players cross from one side to the other until only two players remain. These players are the winners and will be the sharks in the next round.

Variations
Make players dribble with certain parts of their feet. Players tend to favor a specific foot for dribbling, make them dribble with the opposite foot. This game can also be considered a variation of Knock Out.